It’s not the rich kids who take out student loans. Debt cancellation will boost the middle class 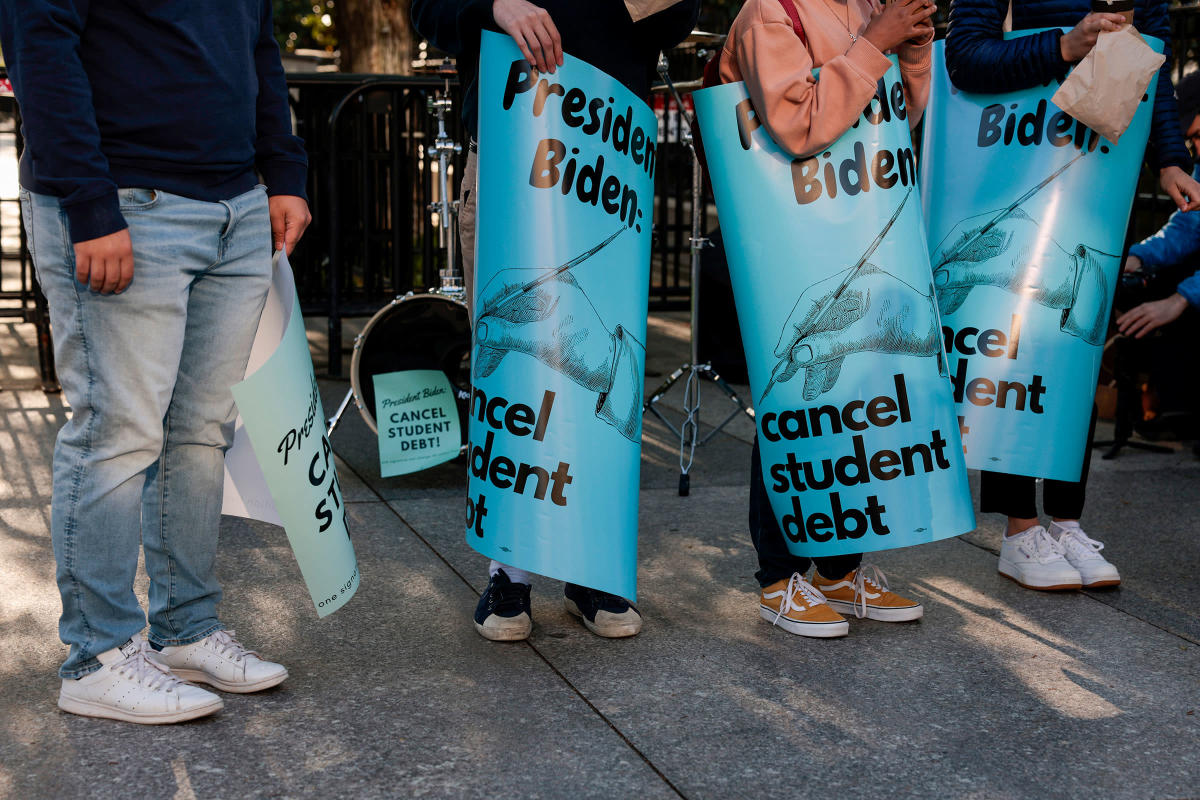 It’s not the rich kids who take out student loans. Debt cancellation will boost the middle class

Activists hold signs as they attend a student loan forgiveness rally on Pennsylvania Avenue and 17th Street near the White House in Washington on April 27, 2022. Credit – Anna Moneymaker/Getty Images—Getty Images

This summer, President Joe Biden has the rare opportunity to take one meaningful step that would rebuild America’s middle class, help close the racial wealth gap, and restore faith in the federal government and higher education: cancel the student debt up to $50,000. Canceling student debt would deliver on the promise of equal access to higher education.

About 7.5 million black borrowers have student debt, or 30.2% of all black households. Canceling student debt up to $50,000 would completely eliminate this burden for 5.5 million of them. The story for Latino families would be even better; Debt relief on this scale would eliminate student debt for 81% of Latino borrowers, or 4.3 million people.

Debt relief is the only just and moral response to the nation’s student debt crisis, directly addressing the enormous economic challenges facing working people. It would ensure that the vast majority of the country’s 45 million borrowers are debt-free, and address the consequences of decades of mismanagement and abuse that have left a generation shouldering the burden of tuition fees themselves, undermining their belief in American higher education as a driver of economic mobility.

And canceling student debt isn’t just smart policy, it’s smart policy. With the stroke of a pen, the president can cement his legacy as a champion of workers, especially first responders, doctors and nurses, fast food and grocery store workers, and educators who have been in the first line of our COVID-19 response. The White House can define this action both as a direct response to the pandemic and as a historic effort to rebuild America’s middle class from the bottom up.

This move would advance fairness across the US economy. A Roosevelt Institute study found that universal debt forgiveness of up to $50,000 would disproportionately benefit low-income borrowers because students from wealthier families rarely use student loans to pay for their education.

In past generations, there was a shared belief that educated citizenship was a benefit to society, and the cost of a college education was largely borne by taxpayers. Over the past 20 years, however, the average cost of tuition at US colleges and universities has risen sharply. A study concluded that tuition at top public universities rose 211% between 2002 and 2022 and now costs the average family more than $11,000 a year. Of course, out-of-state tuition and tuition at private institutions often cost two or three times that amount.

Despite the steep rise in costs, a college education is still considered the most reliable way for people to enter or stay in the middle class. It’s no surprise, then, that more than 45 million Americans currently hold $1.6 trillion in federal student debt, with an average debt of $28,950. Over 21% of all households are affected by this burden which often turns into a crisis as people are forced to delay buying a home, having children and starting a business. It’s perverse: the cost of the ticket for the middle class prevents people from achieving the economic security that characterizes this same middle class.

As members of the union I represent, the American Federation of Teachers, have been forced to learn the hard way, borrowers are doomed to failure by a byzantine debt relief program that depends on the lending system existing students and tons of paperwork. President Biden has successfully swept through the red tape in the student loan system, including promising to fully automate debt forgiveness for disabled borrowers, military borrowers, and federal employees. This approach is a model for how to provide rollback at scale as well.

Canceling student debt would be a huge financial boost for tens of millions of Americans. More than that, however, it would be a way for the president to accomplish the core of his agenda — rebuilding the middle class, closing the racial wealth gap, and restoring faith and trust that the higher education system is there. to serve the common good.